Those Deep Down Dystopian, Post-Apocalyptic Blues 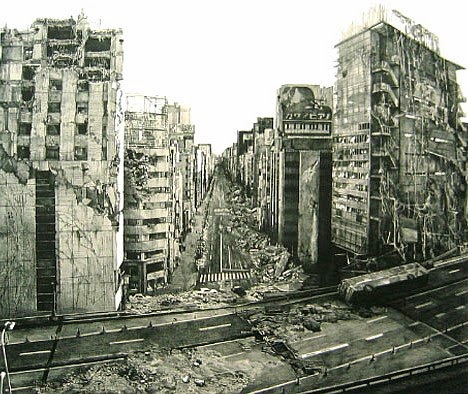 In television, movies, books and games the sub-genre's gotten to be such common parlance that it practically needs no set-up.  Throw a few overgrown, crumbling buildings onto a desolate landscape, drop in some distressed and abandoned cars and/or SUVs, cue the entrance of a scruffy looking wanderer (or group of wanderers) armed with a random assortment of high and low-tech weaponry, and the audience knows they're in a post-apocalyptic setting.

I get the attraction.  Really, I do.  Post-apocalyptic is easy.  It's so easy that even mainstream literary writers like Lee, McCarthy and Lepucki are getting in the act.  It's science fiction without having to bother much with the pesky science bits.  In fact most post-apocalyptic stories dispense with the science early on, if they bother with it at all, during the set-up.  Take Dawn of the Planet of the Apes, a recently released Summer blockbuster.  In the film's prologue we learn that apes were made intelligent by a virus that, as an encore, all but wiped out humanity.  After that, science is pretty much sent to the showers and the movie proper unfolds as social allegory and CGI battles scenes.

The Post-Apocalyptic movie and television show have become to the new millennium what the Western was to the mid-twentieth century.  They are popular, action-oriented entertainments that are inexpensive to produce.  And you can do pretty much as you like with zombies, mutants, aliens and the other stock villains of post-apocalyptic fiction.  They can be as evil and threatening as you need them to be and you can kill them off in droves.  No one's going to object that you're vilifying and misrepresenting an actual race of people European settlers drove to the very brink of extinction. Unlike Native Americans, zombies, aliens and post-apocalyptic mutants have the advantage of being fictional.  They are the ultimate 'other' who can be exterminated wholesale without hesitation or moral qualm; a critical consideration if the excessive deployment of assault weapons and other small arms is central to a story's entertainment value.

The apocalypse used to be a bad thing.  Some post-apocalyptic stories, such as Miller's Canticle for Leibowitz, were cautionary tales warning us of the fragility of civilization and the dangers of technological hubris.  In others, like David Brin's The Postman, the devolution of society after an apocalypse and our darker impulses are obstacles to be overcome in order to arrest the slide toward chaos.  Still others examined the essential nature of the human society when a civilization arrived at over the course of thousands of years suddenly falls away.

Lately though, we've become jaded.  The Post-Apocalyptic landscape has become so familiar, so laden down with tropes, that it's more theme-park than catastrophe in the popular imagination.

Zombieland, for example, is a dark comedic romp where there's little remorse for civilization lost.  Tallahassee, played by Woody Harrelson, a man without purpose in a civilized society, has found his true calling as a Post-Apocalyptic zombie killer.  Jesse Eisenberg's Columbus has a shot at love with Emma Stone's Wichita, a woman who would be well out of his league if all the attractive guys hadn't been turned into the shambling undead.  Aside from the dwindling supply of Hostess Twinkies, the apocalypse has been a net positive for the male protagonists of Zombieland.

Never mind that polio, cholera, mumps, measles and tetanus are far scarier than zombies when modern medicine doesn't have your back.  There is money in pushing the post-apocalyptic world as a dystopian fantasy.  A quick survey of the internet will reveal a surprising array of items for sale that no post-apocalyptic survivor would want to be without, from survival rations to anti-zombie cutlery and ammunition.  Even the CDC and FEMA have leveraged our fascination with the zombie apocalypse and the end of civilization as we know it in order to promote emergency preparedness.  This is not lost on risk-averse publishers and media execs who, perceiving the apocalypse as a sure thing, are sold on selling us the end of civilization. And so they do.  Like a raging virus or the rampaging undead, post-apocalyptic fiction, movies and video are overwhelming the Science Fiction landscape.

Like I said, I get it. Publishers and media execs are paid to make money, not to exercise artistic integrity.  Post-apocalyptic is an easy sell and "It's the next Hunger Games" goes a long way toward getting a project green-lighted.  But it's getting old.  The apocalypse used to have shock value.  Now it's just banal and depressing.  Worst of all, it's become unimaginative, and that's exceedingly bad news for Science Fiction; a genre that is at its best when the imagination is in full flight.

Much has been written about the decline of Science Fiction.  It is, I have to admit, a much less dynamic a form than it used to be. As writers we are decidedly less daring and creative than we once were. I believe it is because we dream less expansively, less audaciously than we once did.  We have lost our enthusiasm for the future. We have become tied down by convention, as if all the trappings of Science Fiction have been invented, all its stories told, and there is nowhere left in all the wide universe we have not gone.

Publishers bear some of the responsibility for this, favoring as they do books that align best with established marketing categories and sales projections.  Following the current hot trend before it cools is the best way to get published, particularly if your book is structured and pitched as a potential series in the event it's a success.  Post apocalyptic stories may be unimaginative, but they fit easily into a publisher's comfort zone and market forecast.

However, at the end of the day, we are in charge of what we dream, and responsible for the stories we tell.  If we confine our dreams to the boundaries of popular culture or a publisher's sales plan, we have done both ourselves and the genre we love a great wrong.

I have a first edition of the Adventures in Time and Space anthology published in 1946 by Random House.  Most of the stories in it, from John Campbell's Astounding Stories, are over seventy years old.  They are products of their day and some wear their advanced years better than others.  However, even the most cautionary of the authors' tales carry an unmistakable enthusiasm for the possibilities that lay before them.  The world we live in was, to them, the stuff of dreams.  And the stuff of their dreams shapes our world even now.

Dream lavishly, my friends.
Posted by The Editor at 5:23 AM