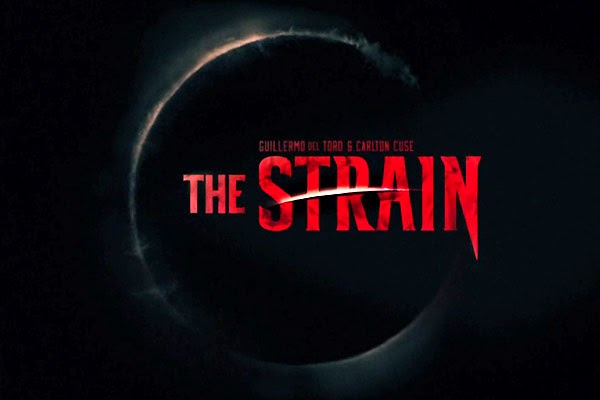 As I've mentioned previously, there's a lot of good Science Fiction and Fantasy turning up on television these days. However, an ongoing bone on the throat for me is television's insufferable vampire dependency.  Or maybe it's television enabling the public's insufferable vampire dependency.  Anyway, suffice it to say that I reached vampire overload some years ago. I find vampire fiction trite, boring and unoriginal.  It's been done to death and back again. It's the same stupid story and I don't care how much we like to hear it over and over and over again,  The last thing television landscape needs is a widening of the already yawing vampire narrative sink-hole.  I swear, I'd trade every vampire show on the air for one decent space-based science fiction series.

It is therefore with considerable chagrin I must admit that one of the best SFF shows of this Summer involves (sigh, you guessed it) vampires.

I have to confess I've been enjoying FX's series The Strain, based on Guillermo del Toro and Chuck Hogan's three book vampire series.  Now, in my defense I have to say that I was sucked in by the visuals and promos before I knew I was dealing with vampires. It looked as though FX was planning a sciencey Body-Snatchers meets Contagion mash-up with great production values.  Which was clever on the part of FX.  By the time I realized The Strain was a vampire-driven series they'd gotten past my guard and I was looking forward to the pilot.

To an extent, the early episodes have followed the Body-Snatchers meets Contagion theme I was anticipating.  And in large part it's that Science Fiction take that's allowed the show to stand out from the usual suspects in the vampire line-up.  The Strain thus far treats vampirism as an ugly and virulent vector-borne disease: a parasitic virus that kills its host and then animates the dead host's body as a means of transmitting itself further. Not only does it re-animate the body, it remakes it; rewriting the host's genetic pattern to create a form optimal to the disease's needs.

As a result the vampires of The Strain retain only the most basic human parameters.  There is nothing romantic, sulky or debonaire with these blood-suckers.  Rather we're treated to decidedly inhuman predators in whose presence humans cease to occupy the top rung in the food chain.  These are feral monsters that project six-foot long 'stingers' from their mouths through which they ingest their victim's blood and inject into said victim the tiny worm-like creatures that transmit their disease; thereby feeding and reproducing at once.  Oh, and they defecate while they feed, and I don't see anyone in the paranormal romance business making that look suave or sexy anytime soon.  It's a nice touch that serves to move the creature firmly beyond the boundaries of human-kind.

Alas, del Toro and Hogan didn't have the courage to trim away a number of weary vampire tropes when writing the books on which the series is based.  The vampires are controlled by a central consciousness; an uber-vampire predictably called 'The Master', who spends his days in an ornately carved dirt-filled coffin.  Abraham Setrakian (David Bradly), aging vampire hunter and Latvian survivor of the Holocaust is a stand in for Van Helsing.  The vampires are vulnerable to ultra-violet light, and are best dispatched using silver, with the body beheaded and burned afterwards.  It's not surprising, I suppose. Del Toro has always had a soft-spot for bringing old lore into the light of the present day.  And Setrakian's silver sword is quite an attractive accessory, just the sort of visual del Toro loves.  I expect you'll be able to order it on-line in time for next year's Comic-Con.

Eph Goodweather (Corey Stoll), the CDC doctor in charge when the contagion arrives by jet-liner at Kennedy airport, and the series' main protagonist, is a scientist's man of science.  He is suddenly in over his head, trapped between the political maneuverings of his superiors and a plague so unlikely that he has trouble convincing himself of its true nature, let alone anyone else.  With the situation relentlessly slipping out of control, he's forced to abandon the usual medical protocols and depend on the advice of Setrakian, who Goodweather had previously dismissed as a disaster-chasing crank.  And, of course, the more stridently Goodweather insists all is not well, the more unsettling his discoveries, the more marginalized he becomes from the CDC and those with the power to take effective action.

Alas, I fear the science fiction bit aspects of the show will not last much longer, though the show-runners are obviously making an effort to keep The Strain from going full-vampire as long as possible.  Eventually science will have to take the back seat before it is finally abandoned by the side of the road, and we'll move from a science fiction/horror hybrid to an old testament/horror hybrid with post-apocalyptic overtones.  I won't say precisely how or why that's the case.  Suffice it to say that the plot of the The Strain will eventually leave the science fiction environs and travel to musty and well-trodden places I prefer not to revisit, no matter how good the show's visuals and production values.

In the meantime, I'm content to sit back and enjoy the ride.
Posted by The Editor at 12:48 PM